From time to time I come across sad stories in my family research. This one is about Mary Ann, my first cousin three times removed, who as a young child was injured in a fire. I found it when I was looking for missing marriage, death and census records for a particular branch in my family tree.

Mary Ann Richardson was baptised on 29th June 1870 in Riccall in the East Riding of Yorkshire. The parish records describe her as the daughter of Joseph (1844-abt. 1916) and Elizabeth Richardson (1849-1915) and that Joseph was a labourer. In the 1871 census Mary was living in Riccall with her parents and brother George. Her father was a railway labourer.

On Saturday 20th March 1875 Mary was involved in a tragic incident which led to her death. A coroner’s enquiry was held into her death on 23rd March 1875 at the Hare and Hounds Inn in Riccall, “to take a view on the body of Mary Ann Richardson”. The report includes statements from three people: her father Joseph, Mrs Hannah Botham and Leonard Smales. (The image is a copy of the father’s statement with his rather shaky signature.) 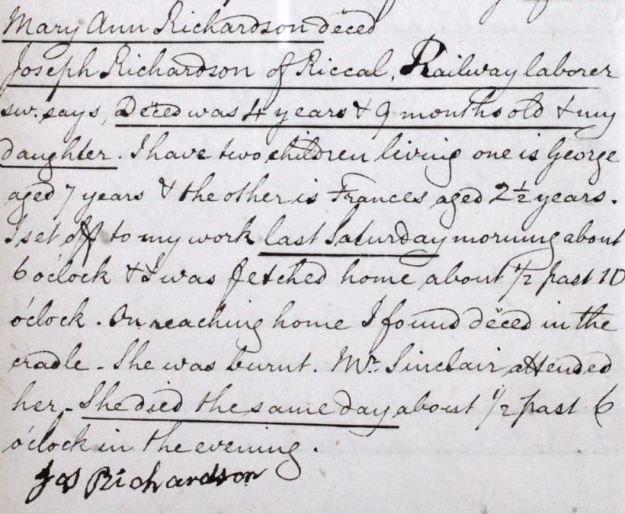 Mrs Hannah Botham explained that she was the mistress of Lady Wenlock’s infant school and that Mary “was intelligent for her age”. Hannah reported that she witnessed the aftermath of what happened to Mary and saw her, “with her clothes blazing all around”. Mary had burns to her legs, body, chest, chin and ears. Hannah carried her into the house where she saw a fire in the grate with “a broad fender before it” and that the oven door was open. Mary’s mother came back from work 10 minutes after the incident had occurred to find her injured daughter. Although her wounds were attended to she died.

The other witness was Leonard Smales a farm labourer.  He also agreed with Hannah that Mary’s two brothers had been playing outside the house when the tragedy happened. It was Leonard who “seized her and rolled her on the floor” to put out the flames. The coroner’s verdict was accidentally burnt. Mary was buried on 23rd March 1875, presumably after the enquiry, in Riccall churchyard. The parish record rather poignantly states that she was aged 4 ¾ years.

By the 1881 census Mary’s parents and four of their children were living in Nelsons Brickyard Cottages just outside Escrick; a village a few miles away from Riccall. Joseph’s occupation was recorded as a platelayer for the North Eastern Railway Company, like his brother Luke (1846-1891) my two times Great Grandfather. The family then moved back to Silver, Street Riccall, which is where they were recorded as living in the 1891 census. They stayed in Riccall and at some point moved to Coppergate where they were living in the 1901 and 1911 censuses; Joseph continuing to work as a platelayer. The 1911 census also records that Joseph and Elizabeth had a total of nine children, six of whom were still alive. I don’t think I have the correct details for Joseph’s death so if anyone has further information then do please contact me.