Francis is my two times great grandfather . He was one of nine children born to Francis and Jane Ellis; their first child to be born England after they moved from Ireland to Kent. Five of his siblings were born Ireland and the remaining three in Kent

Francis was born on 5 October 1839 while the family were living on the frigate Cadmus on the river Swale. His father was a boatman with the coastguard service which he himself went onto later serve. Francis was baptised in Herne Bay on 30 April 1840 after his family had moved from the Cadmus to the coastguard station in Herne Bay.  Their next move, on 23 December 1840, was to the coastguard station at the Fort Moncrief battery, in the parish of West Hythe. The 1841 census shows them living in the barracks at Fort Moncrief where Francis’ age is given as one year old. In the 1851 census the family are still living at Fort Moncrief and he is aged 10 and a scholar.

Francis joined the Royal Navy as a boy first class on 7 October 1856. The date of birth shown on his record is 5 October 1838 although it looks like it has been amended. At the time he volunteered for a 10 year period he was 17 rather than the 18 as suggested by the date of birth on his Admiralty record. The first “ship” he was assigned to was HMS Excellent, the Royal Navy’s shore based training establishment at Whale Island near Portsmouth, and at the time of his enlistment he was described as:

Francis then served on HMS Renown from 23 November 1857 to 25 September 1861. Initially he was a boy first class; although by 1 January 1860 he was an able seaman.  At the time of the 1861 census HMS Renown was in Beirut, Syria and Francis was aged 23 with the rank of able seaman. His next posting was back to HMS Excellent, the Navy’s shore training establishment, where he stayed until 28 July 1862. On the following day he posted to HMS Edgar (1858) which was the fourth ship to carry the name and was a second rate screw ship of the line. Whilst serving on the ship Francis was promoted to leading seaman second class and he remained on HMS Edgar until 14 December 1864 when he went back to HMS Excellent until 14 October 1866. It is perhaps during this time that he met Elizabeth Small Brown, born in Portsea, who would later become his wife.

While he was at HMS Excellent on 17 October 1866 he signed up for a further 10 years service. In his service record he is described as: height 5ft 7in, complexion fair, hair brown, eyes grey and marks none.

Francis started his next posting as a leading seaman on 15 October 1866 on HMS Castor (1832); used as a training ship from 1860. He probably transferred to the coastguard service on 11 October 1866 and remained on the HMS Castor as a boatman until 4 October 1869, although his service record also states that he was at Sutton Bridge in Lincolnshire.

Francis married Elizabeth Small Brown on 12 December 1867 in the parish of Portsea, Hampshire. On their marriage certificate he is described as aged 27 and a bachelor with the rank of boatman in the coastguard service; he was living at Sutton Bridge, Lincolnshire at the time of the marriage and his father was named as Francis Ellis a naval pensioner. Elizabeth’s age is given as 22, a spinster living at Ivy Street, Portsea. Her father was George Brown, a rope maker in the dock yard.

Francis was promoted to commissioned boatman on 5 October 1869; a rank he held until 29 May 1878 when he became a chief boatman. Between 1869 and 1878 he served at three different coastguard stations:

In the 1871 census Francis, his wife Elizabeth and two of thier children: Elizabeth Jane (2 years) and George Francis (8 months) are living in Sutton St May, Lincolnshire in a street with other members of the coastguards;  possibly at 6 Custom House, West Court, Sutton Bridge, Long Sutton.

Whilst serving in Lincolnshire Francis was promoted to chief boatman in charge on 23 February 1883 and then to chief officer on 28 July 1883. The family moved to his next posting in Filey in Yorkshire on 27 August 1885. The 1891 census shows the family living in Hope St, Filey. Francis is aged 52 and described as chief officer coastguards HM service and his wife Jane is 46. Three of their children are living with them:

The family were living at 28 Hope Street Filey in 1892 when Francis was described in Bulmer’s 1892 directory of trades as chief officer, H.M. Coastguard. He continued to serve as chief officer coastguards in Filey until 28 July 1893 when he became a shore pensioner.

This posting is interesting to me as we used to spend time as a family on holiday in Filey in the late 1960s/early 1970s. I never knew that it played a significant part in my own family history. this current day picture was taken looking back towards the town.

At some point the family moved to York in Yorkshire where they are shown as living at 40 Park Grove, part of St Thomas parish, Walmgate district in 1901 census. By now Francis is 60 and a naval pensioner and his wife Jane is 56. Just their son Ernest Alfred aged 20 is still living with them; an apprentice carriage building worker, born in New Holland, Lincolnshire. 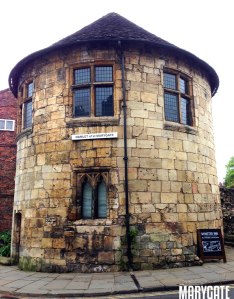 By the 1911 census Francis and his son Ernest are living at Bean St, Marygate, York; an address  which has since been demolished to build a car park. Francis is described as married, aged 72 and a naval pensioner. His son Ernest is 30 and a joiner in the Railway signalling department. There is no information on this census record about his wife Elizabeth and so far I haven’t found her death record. Francis died in 1925 and his death was registered in the St George’s, Hanover Square, London registration district where he was probably living with his daughter Elizabeth (1868-1943), husband John Goodge and family at the time.

None of Francis’ four sons followed him into the coastguard service. His eldest son, George Francis (1873-1938), is described as a sorting clerk and telegraphist in the Post Office in the 1911 census. William Charles (1873-1951), my great grandfather, was a labourer for the Army ordnance station in 1911 census and a porter for a chemist in 1939 register. James Edward (1875-1944) is shown as a retired sorting clerk and telegraphist in 1939 register and Ernest Alfred (1800-1957) a window cleaner in 1939 register. All Francis’s sons remained in Yorkshire and at least two of them in York which is where I later went to school, not knowing much about my family history in the area.