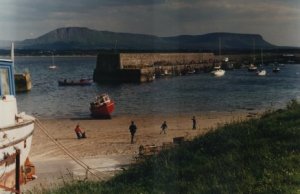 Francis is my three times great grandfather. He was born in Mullaghmore, Ireland, on 24 May 1800 and is believed to have first gone to sea as an apprentice in 1814. By 1829 he was married to Jane and they had one child; as shown on his papers for his appointment to the coastguard service as a boatman at the Inniscrone coastguard station in Ireland, at the age of 29. It looks like he had previously worked for the service as an “extra man”. Whilst in Ireland Francis and Jane had more children; they moved to Kent, England in 1839 with five children: three boys and two girls all born in Sligo or nearby.

Francis took up his post as a boatman on 1 July 1839 on the frigate Cadmus. This was a watch vessel moored 20 yards from the shore in the river Swale. Its commanding officer, seven men and their families were accommodated on board the boat. There was a communal stove where wives cooked meals. The commanding officer had his own galley. An allowance of 4d (1.5p) per day was paid for coal and lighting. Laundry was done on a rota basis, each wife being allocated one day in the week when she could do the family washing in a portable boiler on deck. The main duty for the men on board the Cadmus was to board and search vessels entering Faversham which was at that time a busy port. They remained on board until Customs officers relieved them. Ship’s boats had to remain ready at all times to give chase and board any ships which ignored signals to stop. A permanent watch was kept from the forecastle of Cadmus and the crew had to be ready to run out and man the boats at any hour of the day or night.

While they were living on the Cadmus, my two times great grandfather Francis (Francis junior) was born on 5 October 1839. The next move for the family was on 30 April 1840 when they went from the Cadmus to the coastguard station in Herne Bay and Francis junior was baptised in Herne while they were there.  Their next move, on 23 December 1840, was to the coastguard station at the Fort Moncrief battery, in the parish of West Hythe. The family is recorded in the 1841 census as living in the barracks at Fort Moncrief. Some of the family were still living there at the time of the 1851 census. Three of their sons: William (20), John (16) and Robert (14), all born in Ireland, were no longer with the family, however the following children were:

In 1851 their father Francis is still a boatman with the coastguard service. However, he  was removed from Fort Moncrieff on 2 Dec 1852 to Grand Redoubt with the reason given for his removal as “punishment”. He was then discharged from the service on 1 June 1853 on an allowance of £29.10s.0d. The Treasury letter was dated  13 July 1853. Whilst it is not clear what the cause was of his punishment, an 1865 return about offences committed by coastguards on shore included:

Francis and his family next appear in the 1861 census where they are living in “Public Street”, Dymchurch. Francis is now described as a coastguard pensioner. His wife Jane, four of their children and a granddaughter are living with them:

Francis and Jane’s sons all naval service of some kind. William became a sailor, John a Chelsea pensioner and Robert and Francis finished their careers as chief officers in the coastguard service. All their daughter married although Mary was widowed at a young age; Anna married a coastguard Emmerson Smith  and Lucy married George Chambers a bricklayer. Robert and Francis’s biographies have also been written.