It was with great delight that I came across an ancestor who was a fellmonger as many of mine are either labourers or worked on the land. However, I did think with the first record I found that it said fishmonger; finding further records for Thomas Bellinger (1841-1938) though convinced me that his occupation was fellmonger and that he lived in Bermondsey, South London. The Tanners of Bermondsey website[1] explains that ‘fell’ is a skin and that a fellmonger was someone who either provided or sold skins to tanners. They might also have prepared the skins by removing the hair or wool from them which wasn’t a pleasant task.

Thomas Bellinger, my second cousin four times removed, was born and baptised in Enborne, Berkshire in 1841 to parents John (1799-1883) and Sarah (1816-1852). John was an agricultural labourer who married twice and had probably at least seven children, most of whom stayed in Berkshire.  Thomas had moved to Bermondsey by the 1861 census when he was recorded as a boarder and fellmonger living at 5 Laxon Street; this was in the Leather Market area of Bermondsey. The leather trade was prominent in Bermondsey in the 19th century and part of the Leather Market building, which was erected by prominent tanners of Bermondsey,[2] still exists in Weston Street[3]. The City of London had banned tanning “because the stench was so foul” and it had moved to Bermondsey where the running water it needed was provided by the Neckinger and other tidal courses.[4] Bermondsey’s growth through to modern times has largely been attributed to the leather trade.[5]

Thomas married Sarah Withey in St James’ Church, Bermondsey on 29 March 1863 and together they had at least nine children, two of whom died in infancy, as shown in the following chart:

The family continued to live in Bermondsey as follows:

During the time the family lived in Bermondsey the population increased significantly from just under 30000 in 1831 to over 81000 in 1901.[6] Much of the housing were tenements in multiple occupation and disease and unsanitary conditions were rife. A report by the Medical Officer for Health for the year 1895 recorded a death rate of 22.1 deaths per thousand of the population in Bermondsey; this was more than the 19.8 per thousand of population recorded for London as a whole. Infant mortality was 162 deaths per thousand. The report particularly noted that deaths from violent causes had increased and that three people were found dead in the Thames and one in the Surrey canal.[7] By 1901 smallpox had also become a specific concern when an epidemic broke out in Bermondsey.[8] Interestingly, one of Thomas’s sons Henry died in 1902.

After Thomas’s wife Sarah died in 1909, Thomas and members of his family continued to live in Bermondsey until his death in 1938 aged 96.

I too came to know Bermondsey when I started work in Bermondsey Street in 2006. I didn’t know about my family’s collection to the area though and although I’ve walked down Weston Street many times, I wasn’t aware of its importance in the leather trade. I’d certainly like to see more of the Leather Market building; something I can rectify on my next visit to the London Bridge area. 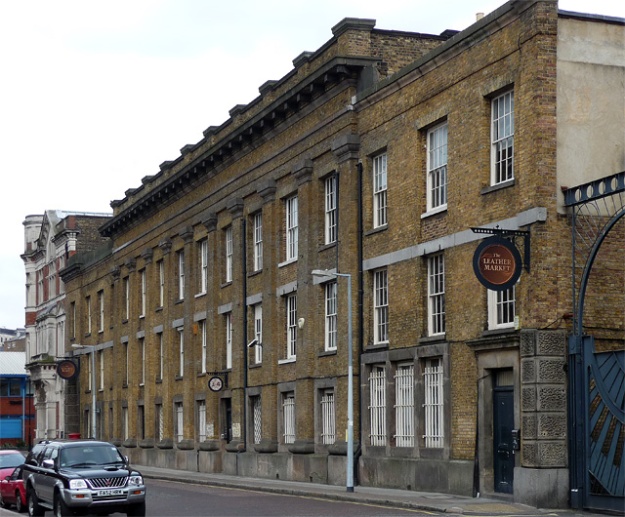