So far in my family research I have found very few people who have emigrated to Australia from either my husband or my own part of our family tree. The most notable person was Thomas King, born about 1813, who was transported to Tasmania for stealing.

Recently I discovered some distant cousins, one of whom emigrated to Australia in 1928 and the other who joined him in 1949. The first to emigrate was Frederick William Ellis (1906-1957) who was born in Luton, Bedfordshire and by 1928 living in Cople in Bedfordshire. He left England for Australia on 13 October 1928 on the ship SS Orford where his occupation was given as farming. Information on the ship he travelled on is included on the Passengers in History website. 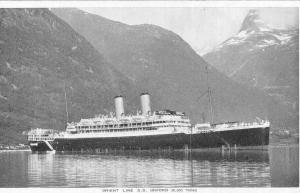 Frederick seems to have settled in Western Australia and so far I’ve been unable to determine if he received assistance for his passage. He wasn’t listed as a new settler arriving on the ship SS Orford in the list published in The Western Australian newspaper dated 10 November 1928.

Frederick was living in Northam, Western Australia when he enlisted in the Australian army in WWII. After the war his sister Helena (1904-1988) and brother-in-law Ashley Herbert Lansom (born 1906), my fifth cousin once removed, together with their two sons, emigrated to Australia on the ship SS Otranto. They left Tilbury Docks, London, England on 14 October 1949 bound for Freemantle in Western Australia. On the passenger list Ashley’s occupation was listed as a plumber and they gave their intended residence as c/o Ellis, 58 Hovea Crescent, Wundowie, Western Australia. The Lansom’s seem to have settled in a suburb of Perth called Dianella as they were recorded living there in The Government Gazette dated 31 August 1979.

A resource that I’ve found really helpful to add context to these two men is the National Library of Australia’s Trove website. It is free to use and is where I found copies of The Western Australia newspaper and The Government Gazette.

Note: the photo of SS Orford came from the Passengers in History website under their Creative Commons license. It has not been modified.